The most innovative manufacturing companies today use a combination of parametric and direct 3D modeling to maximize innovation while at the same time ensuring speed, flexibility, and faster time-to-market.

Companies from iPhone case makers to motorsports manufacturers like KTM Motorcycles are living proof that it doesn’t matter which industry you operate in. Everyone benefits from 3D CAD software that provides both parametric and direct modeling capabilities in one common environment.

With both direct and parametric “everyone can take existing designs and make modifications to improve performance,” says Olaf Seger, a company designer at KTM. That’s important because the innovation machine needs to stay revved all the time to keep KTM competitive. “Every model that we release integrates the best of our engineering when we release it.”

Product design teams are often forced to compromise when it comes to using CAD software, with most using just one modeling approach. In recent years, CAD vendors have begun offering both direct and parametric functionality. But too often, those tools require users to switch between modes or using two different data models, rather than seamlessly integrating both modeling approaches in one design.

But with PTC Creo, designers can choose the right modeling approach for the design task at hand, and it’s all in one environment. In addition to powerful parametric modeling, PTC Creo gives users the flexibility to directly edit geometry without worrying about feature constraints and relationships, while maintaining all design intent. This is especially handy when the designer isn’t very familiar with a particular model, or when design changes need to be quickly incorporated.

There’s no shortage of design scenarios that call for a combined parametric and direct approach. Here’s a look at just some of the situations where the option to use direct modeling technology can add significant value, even if you’re using a purely parametric strategy today:

During concept design
Concept design is a time to generate as many product ideas or concepts as possible. A combination of direct and parametric approaches allows you to build on existing designs or create new ones with speed and agility. And with PTC Creo, all changes are tracked so that they stay synced up with the parametric model.

When working with legacy CAD data
Legacy data can be difficult to maintain, edit, and repurpose because traditional CAD solutions often treat non-native data as unimportant “dumb” data. But introduce direct modeling into the mix and those problems disappear. Direct modeling gives users the power to easily modify and reuse legacy data for new purposes.

When collaborating on a multi-CAD design
Often, suppliers and partners use different CAD systems, introducing collaboration challenges like lack of design re-use. Sometimes CAD models cannot be imported correctly, and that means they have to be manually rebuilt– costing time and potentially introducing errors into the process.

With direct modeling tools, users can import third party CAD files regardless of their source and modify them. With PTC Creo, any changes are captured as parametric design intent. In other words, a combined direct/parametric approach makes it easier to incorporate and edit CAD data from various systems.

When improving simulation workflows
Digital prototypes need to be frequently analyzed as the design evolves–a process that usually requires engineers to simplify the model by removing features, so that the analysis can be completed quickly. Direct Modeling supports designers and analysts in removing features such holes, faces, features, blends, and other geometry. These capabilities let users prepare parametric models for analysis without requiring a high level of experience with the parametric modeling capabilities.

Watch this video to learn more about flexible modeling and PTC Creo: 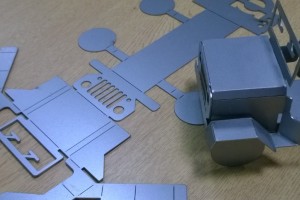 One of the more commonly used materials used in manufacturing is sheet metal. One of the primary benefits of sheet metal is that is can be fabricated or bent and shaped into nearly any shape or thickness. The sheet metal industry is huge. Today there are 12,300 companies worldwide employing 600,000 workers who produce sheet […]