You are here: Home / Industry News / Why Professional Graphics Should Matter for CAD Users

In the early days of PC-based CAD, high-performance graphics cards and large-screen monitors were required to run CAD software effectively. Desktop computers of the day came standard with low-resolution (320×200 or 640×350), few-colour (4 or 16) displays. But with 20-inch tube monitors (running 800×600- or 1024×768-resolution 256-color graphics) weighing in at 75 pounds and costing thousands of pounds, the solution wasn’t cheap – or fun to lift.

Fast forward to today, and 22inch flat screen monitors are a throwaway commodity. But what about the graphics cards: are high performance ones still necessary?

Often, inexpensive gaming cards are used in computers for CAD work, and sometimes even no special graphics card at all (through the use of embedded graphics that are bundled with the CPU). There is little thought put towards a key component of the CAD workstation. Inadequate graphics cards can lead to numerous problems, including slow performance, driver upkeep issues, and lack of support for key 3D display-based commands in CAD software.

Specifying professional-level graphics hardware for CAD workstations can minimise problems and so make the lives of CAD users more productive and pleasant. The question then becomes: How do I select the right graphics hardware, and how do I persuade IT departments, managers and other stakeholders that it is worth their time and money to do so?

To answer these questions,  chip manufacturer and computer graphics specialists NVIDIA  answered some of the common questions on how professional graphics (specifically their Quadro product line) might help CAD and IT managers get the most from the CAD software they support.

Q: Quadro boards are Nvidias professional series, and the GeForce boards the consumer ones. What’s the difference between them?
A: Quadro and GeForce, at the most basic level, share a common set of graphics processing units (GPUs) and rough board design; however, there are significant differences. The Quadro line is a collection of hardware that is tuned and supported for deployment into an office environment, and is manufactured by NVIDIA.  In contrast, GeForce is a set of chip technologies that are licensed by other board manufacturers.

Q: From a hardware point of view, what do Quadro boards provide that consumer-level products don’t?
A: A given Quadro card is the same card regardless of where or how you purchase it, because it is made by NVIDIA to a single specification. Second, Quadro offers extended availability and support, and a warrantee that lasts three years.
Contrast this with gaming cards, each of which is offered by multiple hardware vendors with differing specifications and configurations. Each gaming card often has well over ten versions of it on the market, making it difficult to know which version to qualify. Gaming card lifecycle, support, and warrantees are much shorter and vary by the board manufacturer.

Q: You mentioned that there are features that help CAD and IT managers deploy Quadro cards. Can you elaborate on that?
A: This is primarily through driver management.. Quadro drivers and hardware are certified & tested to be compatible with 100s of the most-used professional applications. For example, when a PTC and NVIDIA say there is a certified Quadro board and driver for Creo, it will mean that the board and driver combination has been tested to work flawlessly on all of the features and views. It also means that the board-driver combo is supported by both NVIDIA and PTC, and so any issues reported by users will be fixed with a high priority by both parties.

Q: I find that having exactly the same hardware on the users’ desks keeps maintenance costs down. So, my question is: If over the course of several months I buy several of a certain model of NVIDIA card, can I be assured all are, in fact, the same?
A: The short answer is yes. Let’s take the Quadro K5000 as the example. Quadro offers an availability and stability advantage over gaming cards. The same Quadro board you purchased two years ago will still be available today. Since workstation hardware is designed to be long-life products, Quadro maintains extended availability. Standard availability is three years or greater. Additionally since we maintain the same specifications, a Quadro K5000 purchased one year ago is identical to the one you purchase today, regardless of geographic location. In contrast, gaming boards tend to exist in the market with many variations of components, cooling solutions, size, and so on.

Q: From a specification point of view, the perception is that more gigabytes of RAM on the graphics board equates to a better board. Is the reality that the RAM simply supports the GPU’s bandwidth?
A: Not necessarily. While both bandwidth and amount of RAM are important aspects of a graphics card, the amount of RAM is the most important factor in determining how large a CAD model you’ll be able to fit into memory on the graphics card. Loading the entire model into graphics memory helps maximize performance by eliminating the need to swap data between system memory and graphics memory.
Quadro cards are designed with memory configurations ranging from 1GB all the way up to 12GB on the high-end Quadro K6000. The memory for each type of Quadro card is optimally configured based on the types of workflows commonly used by the majority of professional users.

Q: Is the processor and memory selection of the workstation a significant consideration for a given graphics card?
A: While there isn’t a specific relationship between a graphics card and a workstation’s CPU or memory, it’s best to think of a workstation as a complete solution. As such, the operating effectiveness of a workstation is only be as strong as its weakest component. It makes little sense to put a high-end CPU into a system and then bottleneck its performance with too small a GPU.   Similarly, if the graphics system is constantly waiting on a weak host CPU to handle application processing tasks, it won’t be able to deliver its full performance. In addition to RAM, be sure to consider the types of monitors (and how many of them) you need to connect to the graphics card, the board’s power consumption, and the slots available in your workstations. Some boards need extra power or two slots.

Q: We all know that software changes. How does this impact my graphics card selection? Is there a formula, such as “buy one higher model than you need today” that staves off obsolescence?
A: There is, unfortunately, no simple formula, because everyone’s needs and workflows are different. This makes specific statements difficult, but we can make some general recommendations.
One common trend is that workloads tend to get more complex over time. Either you’re working with larger models than you previously did, or you’re being asked to submit more design iterations on a project. Both mean that being able to increase your productivity is vitally important.
I recommend that CAD managers take a look at how workloads have increased in complexity over the one to two years, and then use this as a guideline as to the type of workload increases they can expect to see in the near future.

If you’re a CAD or IT manager responsible for specifying workstations and their components, I hope this discussion has opened your eyes to some of the reasons why a bargain graphics card isn’t always a bargain. When you take all the variables into account over the three-year (or maybe more) lifespan of your CAD workstations, it becomes apparent that a robust and well supported professional graphics card can be seen as an investment in uptime and productivity.

PDSVision: the new home of Creo Elements Direct in the UK 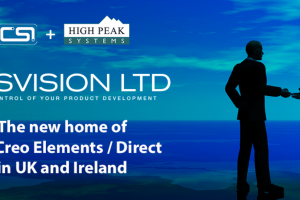 PDSVision have united the existing specialists in Creo Elements Direct from CSI and High Peak Systems to create a powerful new force in the UK CAD/PLM arena. By combining these teams with a dedicated Management and Administration function we have formed a unique organisation focused on Creo Elements Direct with capabilities in supporting your current systems and taking […]